We had time to walk all over San Cristóbal Centro. It’s all familiar to us now, the beautiful pedestrian-only streets lined with excellent shops and lots of people, street musicians, and the lovely single story, simple colonial buildings with tile roofs, flower pots and draping vines.

Trip Advisor told us we’d never have a better hamburger than at EL BRASILIERO, so we tried it and it tuned out to be both delicious and fun. It has only four tables. The super friendly owner is Brazilian (duh!). He smokes the meat and each variation of hamburger is served with it’s own homemade bun, one parmesan, one beet, etc. Each served with smoked tequila barbeque sauce and leek mayo. It was over-the-top good. The conversation was lively, including the other couple dining. It started pouring as we were going to leave, so we could not walk to the great French bakery for dessert. We were lucky to finally get a taxi.

The resident peacock at Hacienda Don Juan was in rare form this morning, flirting like crazy with two hens walking indifferently in the other direction. If he was flirting with us, he succeeded. It’s a spectacular site, a peacock with his tail spread and his majestic carriage with the morning sun making his feathers sparkle. I think we are lucky, always to come here in the spring when it is mating season. Or maybe he just loves us, and struts his beauty just for us.

We drove to the nearby village of Zinacantán, home of some of the most lavish embroideries. A little booth at the entrance charged a small admission to the town (quaint) and also offered guides to some of the best textile families. We accepted the help as an experiment. Our guide was a girl about ten years old, and she did indeed take us to families we would never have found on our own. We bought from them all and feel like we hit the jackpot with the third family. Their quality was the best, their prices fair, and they were so warm. We spent easily a couple hours there selecting the elaborate men’s huipiles, decorative panels embroidered with animals, table runners, etc.

What they draw before they embroider Three generations of weavers and embroiderers. We had such fun with them.

Back in San Cristóbal, dinner was at another small restaurant with handmade pasta, TRATTORIA CATANZARO, with our host Andrea, definitely worth retuning to.

Guadalupe Hermosillo, who is in the Great Masters book, has a beautiful, clean studio and tidy, museum-like show room upstairs, making it easy for us to make our selections.

From 1528, when San Cristóbal was founded, through the 1800s, a strong tradition was for every home to bear a rooftop iron cross. Spanish blacksmiths taught the locals how to make them. Guadalupe has researched historic crosses and has a collection of twenty-six replicas of early, simpler crosses. He has built on this tradition, creating much more elaborate versions but retaining many of the original symbols. The crosses tell the story of the passion of Christ, but in icons rather than showing Jesus himself on the cross. Part of the appeal of Christianity to the indigenous peoples was that the beatific mother figure, the Madonna, did not require human sacrifice, so rampant in the Aztec religion. So it was not strategic for Christians to use human sacrifice as their main symbol (even though the meaning of the death and resurrection of Christ was that Christ’s sacrifice would end all other human and animal sacrifice). So the Christians told their story in symbols: the cock who did not crow until Peter had denied Jesus three times, the spear that cut the wound in his side, the pliers that pulled out the nails, the ladder used to remove Christ from the cross, the sun and moon, because there was an eclipse that night, the dove representing the holy spirit, and the scales of justice that Jesus died for. 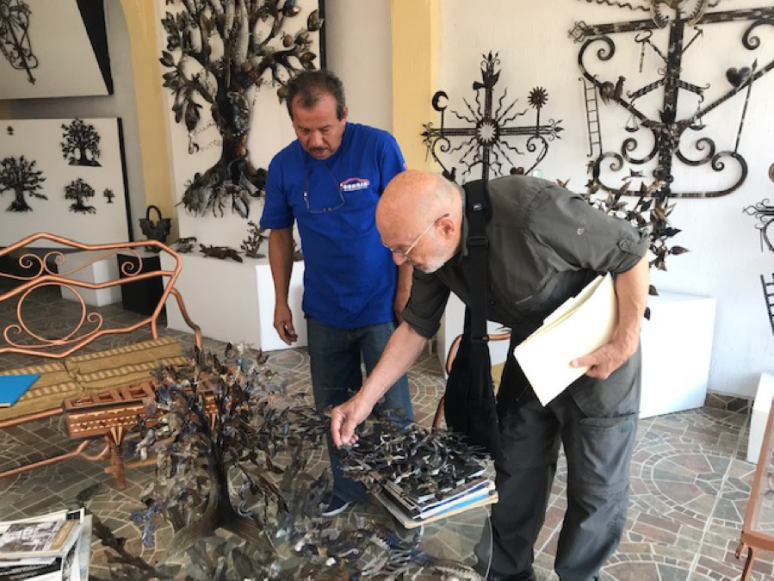 From Guadalupe’s, we headed for the huge Santo Domingo market where we spent the rest of the day selecting pillow cases, table runners, beaded bracelets from the vendors we know and trust. Mayer always finds his parking place near the market. This time we had to go around the block once, but then someone was pulling out and there was our spot!

We were so lucky to overlap by just two days with our friends Susan and Richard Neulist, who spend the spring in San Cris. They are leaving tomorrow (!), but we had dinner with them tonight at our favorite COCOLICHE. The curry was not as good as the last time we remember, but the conversation was wonderful!

Tuesday, April 9 – Drive to the Border

Our gracious hotel owner was willing to store our big bags of textiles until we return so we can take our van to the border empty. Before, we used to take a van to the border, but our dear friend Clint found a great secure parking lot at the border, so we could drive there ourselves. Much better than those crowded vans! We still can’t take the van into Guatemala because we cannot get insurance there and besides, driving there is insane.

The village of Amatanango, where our dear friend Esperanza Pérez makes her incredible jaguars, is on the way to the border. We had arranged with her to stop there and spent a couple hours selecting many jaguars and jaguar jars. We leave a lot of packing material with her so she can pack it all up, and we will pick it up on our way back from Guatemala, and retrieve all the boxes and foam wrap she does not need. Esperanza Pérez and her jaguars

The highway to the border has so many topes through all the little villages that it makes the drive terribly jumpy and stop and start. Oh, they are tiresome. I feel like I need a chiropractor! The scenery through the mountains is gorgeous. We arrived at the border, where there is very little going on and what is there is quite primitive. The parking lot, attached to HOTEL ABORADO, with very nice host, Enrique, was indeed very secure. We parked and walked around the very lazy area. We chose a hut with roasted chicken for dinner, served on a Styrofoam plate, and we had to ask for the plastic fork. It was good. Then we headed back to the hotel for an early evening at the hotel where we had parked, the only option in the area.

We were not prepared for this. Up some rickety stairs, we were led through two large rooms, each with lots of beds, clearly a hostel type place. We did get a private room, accessible through these rooms. There was only one bathroom for all these beds! But fortunately, we were the only people there. We were calling it our one-star hotel, but by the time we left, we gave it 0 stars. There was no hot water and no showerhead, so you got just one stream of cold water. The one luxury provided was a powerful fan that actually worked.

Mayer: If I said the hotel had basic amenities I would be exaggerating. The last time I experienced this kind of depravity, I was 19 and hitchhiking to South America.

There is one other hotel that competes for the worst: the Terremoto (Earthquake) Hotel in Olinalá. At least this one did not have mold in the bathroom! – It’s all part of the adventure. We laugh and curl up and sleep!

We had arranged to meet a driver right at the border at 10:00 but forgot that Guatemala is an hour behind Mexico, so we had an hour to wait and got to talking with a sweet guy who was offering to change money for us.

This site uses Akismet to reduce spam. Learn how your comment data is processed.

Introducing Manuel de la Peña! 😱 We are introducing to the gallery the exciting new cut paper works of a young artist whom we consider to be a rising star!