While many types of Mexican folk art have their origins in pre-Hispanic art and have evolved over hundreds of years, the much beloved carved and painted wood animals, birds, and alebrijes (fanciful monsters), that have now made three Oaxacan villages famous for their wood carving, go back only as far as the 1950s. Small wooden toys and masks were commonly carved before that time, but in the early 50s, Manuel Jiménez Ramírez pioneered more elaborate and colorful animals and encouraged other wood carvers to do the same. It was not until the 1980s that the work became enormously popular.

Oaxacan wood carving is some of the best known folk art in Mexico. More than 800 families in three villages make their living creating ever more beautiful and innovative woodcarvings. Among the most skilled and creative of these are Claudio and Teresa Ojeda, located in San Antonio Arrazola, right at the base of the magnificent mountaintop ruins of Monte Alban. The Ojedas have distinguished themselves by creating large-scale sculptures, and also by developing distinctive painting techniques that they preserve as their own and will pass on only to their two sons as a family inheritance. 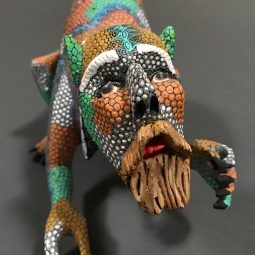 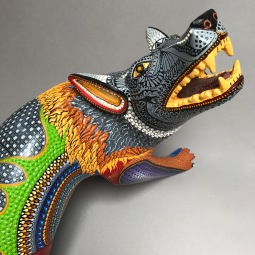 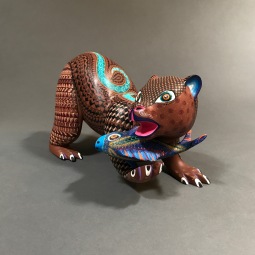 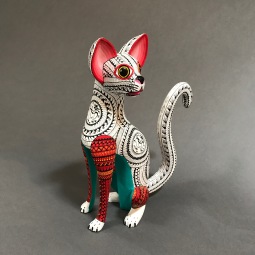 While many types of Mexican folk art have their origins in pre-Hispanic art and have evolved over hundreds of years, the much beloved carved and painted wood animals, birds, and alebrijes (wildly imaginative creatures), that have now made three Oaxacan villages famous for their woodcarving, go back only as far as the 1930s, and it was not until the 1980s that the woodcarving became wildly popular. The author of a book about Oaxacan crafts says he spent three summers in Oaxaca during the 1960s, and was unaware that any woodcarving was going on at that time.

Manuel Jimenez Ramirez started the wood carving tradition in Arrazola in 1927 when he was eight years old. He began making animals out of clay, but soon switched to wood, intrigued by the ideas that the curves in the wood suggested to him. He became a charismatic man who was also a kind of town leader. Many other families picked up the art, and it even spread to other villages. In 1940, a collector from New York encouraged Manuel to begin signing his work. Manuel died in 2005 at the age of 86.

Manuel’s sons had picked up the family art and are themselves now accomplished artists. Angélico has been working as a carver, sculptor and painter for over forty years and Isaías for over fifteen. Both have their own workshops and are assisted by the wives and children. In 2002, Angélico went to China for almost a month to participate in an international competition of wood carvers.

In 1936, the Mexico City paper maché artist, Pedro Linares began creating fanciful creatures, which he called called “alebrijes.” Linares coined the term alebrije, which came to him in a dream in which fanciful creatures were dancing in the forest and calling out the word “alibrije,” (a made-up word).

Linares’s alibrijes inspired Oaxacan woodcarvers, who began creating these fanciful animals in wood in a wide variety of shapes and sizes. Now, virtually all Oaxacan woodcarvers create some form of alibrijes, along with other more recognizable animals of all sizes. (The Linares family is still creating alibrijes out of paper maché.)

The wood commonly used throughout Oaxaca for woodcarving is copal, which the artists call “magical.” It is easy to carve yet durable, and the sometimes twisty or curvy shapes of the branches suggest ideas for figures to the artist. Copal is native to Mexico and has many uses beyond woodcarving. The sap or resin can be used for a variety of medicinal purposes; the fruit and foliage produces aromatic linaloe oil used in making lotions and soaps; and the resin of the tree burns as earthy incense used in spiritual rituals.

Copal trees began to disappear and were being illegally cut and delivered to wood carvers at night on a kind of black market when, in the early 2000s, Associate Professor of Tropical Ecology at Yale University, Charles M. Peters, with research assistant Berry Brosi, after extensive study, developed a reforestation project for which they received official approval and enthusiastic participation from the wood carvers. Their sustainable forest is located in the village of San Juan Bautista Jayacatlán. Now, whenever artists purchase their copal, legally, a portion of the fees support the reforestation project.

Among the most skilled and creative of the many woodcarvers are Franco and Nellie Ramirez, located in San Antonio Arrazola, right at the base of the magnificent mountaintop ruins of Monte Alban. The Ramirez family has distinguished itself by creating large-scale sculptures, and also by developing distinctive painting techniques and surface treatments. Their skill in carving animals that are lively and full of gesture combined with their exquisite, highly skilled painting make these carvings exceptional. Franco Ramirez learned woodcarving from his father, who was one of the early wood carvers in the village of Arrazola.

When gallery owner Mayer Shacter first saw the work of Franco and Nellie, it stood out for him as distinctive and beautiful crafted, different from the ubiquitous small figures created for tourists. He located their studio in Arrazola and was delighted to meet them and their tiny newborn. It has been a pleasure to see this sweet boy become a toddler over the next few years.

Galeria Atotonilco also carries woodcarvings made by a collective called Tribus Mixes. The Mixes indigenous group live in the mountains in the eastern part of the State of Oaxaca, where some 90,000 of them still speak their native language and maintain ancient religious practices, now mingled with Catholicism. They still use the 260-day ritual calendar, which was once widely used through out Mesoamerica, for planning their rituals and naming their children. They have a pantheon of earth gods, and they believe that every person is born simultaneously with an animal that carries part of that human’s soul.

The Tribus Mixes woodcarving collective was started by Noel Martinez in the 1980s in the Mixes village of Ayutla. Owing to “political difficulties” in Ayutla (jealousy of the success of the project?), in 1994, Noel moved his studios to the City of Oaxaca, along with about 40 families who moved there with him. Today, in addition to Mexico City, he maintains a studio in Viguera.

The workshop in Oaxaca is located on the outskirts of town where Noel and his partners maintain a gorgeous piece of property with lovely well-kept gardens and several large studios and showrooms. Their work has a distinctive look characterized by smooth curves, lively gestures, and original finishes. They are known for their magical way of representing old legends and for their close connection to nature.

The artists use paint in unusual ways and with added ingredients to add texture to the surface of each piece. In addition to copal, they use other woods such as oak, willow, cedar, and guacatillos. Some of their natural woods are so beautiful they are reluctant to paint them.

While at one time, Noel and his partner, Neftali, had as many as 110 people working in the collective, currently about fifteen woodcarvers work there full time.