About 10,000 Huichols, descendants of the Aztecs, live in Mexico’s Sierra Madre Mountains in an area so remote and hazardous that the Spanish conquerors never found them. They remain one of the most intact primitive cultures in the Western Hemisphere, having adapted to their harsh environment, still a pocket of isolation in the states of Jalisco and Nayarit. For many centuries, to this day, they have preserved their ancient spiritual rituals, their language, their art, and their agricultural lifestyle.

For Huichols, religion is not a part of life — it is life. The gods are everywhere, in the corn, the sun, the rain, and in trees, hills and lakes. Even the lowly stone has a soul. They are corn farmers, artists, and shamans for whom spirituality is central to their existence. They continue to dress in spectacularly embroidered apparel because they believe themselves to be mirrors of the gods. Women spend months creating the beautiful native dress that so identifies the Huichols wherever they go.

Huichols have nurtured a value system and way of life that hold lessons for the modern world. Their art, symbolism, music, folklore, plant knowledge and profound religious insight are a source of inspiration and wisdom for people around the world. These intensely religious and earth-based people immerse themselves throughout their lives in spiritual awareness through elaborate rituals and the use of sacred symbols in their works of art.

Shamans are responsible for the overall wellbeing of the people, the crops, the homes and the livestock, and continually negotiate with the spirit world to maintain this delicate balance. Numerous ceremonies throughout each year ensure open dialogue between the human and mystical realm. Shamanic training requires ten years.

The Huichols make an annual pilgrimage to sacred land in the Wirikuta desert – 600 miles round trip – to gather sacred peyote and to perform a series of rituals to experience divine transformation. From the ecstasy of that experience, the artwork of the people is born. In the Huichol culture, there can be no art without religion and no religion without art.

Every work of art is imbued with symbols, scenes, and colors inspired by their peyote visions, their dreams, and their encyclopedic knowledge of ancient myths, of plant and animal life, and of religious rituals.

“When you own a Huichol yarn painting,” according to gallery owner Mayer Shacter, “you will never tire of the spectacular beauty, and you are bringing rare ancient, earth-based wisdom into your home. You own a powerful and compelling work of art, and you are helping to keep alive ancient wisdom, to support Huichol families, and to encourage artistic innovation within the tradition. The work comes from a place deep in the soul of the ancient Huichol people.”

To create a yarn painting, the artist spreads a proprietary mix of bees wax and resin onto a piece of plywood and then presses yarn into it, one strand of yarn at a time. They use a similar technique to press beads into wax that has been spread onto gourds or carved animals. The beaded gourd bowls were also used in ancient times as votive offerings. 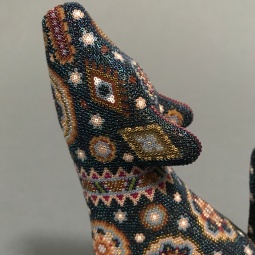 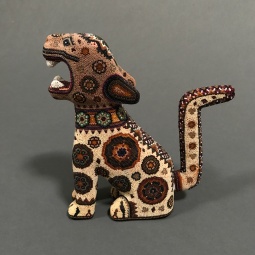 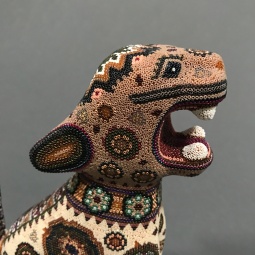 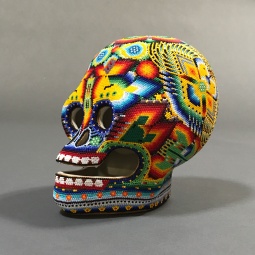 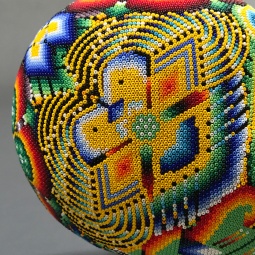 The History of Huichol Yarn Paintings

Modern Huichol yarn paintings have an interesting history and are one of the great success stories of indigenous art. It is only since the 1950s that what began as little-known tribal votive offerings evolved into an international art, sold all around the world. Yarn paintings have been exhibited in museums and galleries throughout Europe, Japan, and the United States. Prices have risen from a few pesos to hundreds and even thousands of dollars for work by the best artists. What started as tiny simple offerings to the gods have evolved into large and elaborate paintings, worthy of the most sophisticated collections.

How did this happen?

In the 1930s and 40s, there was a growing interest in Mexican popular and indigenous arts, fueled partly by Diego Rivera and Frida Kahlo and the artists that surrounded them. In the early 50s, anthropologist Alfonso Soto Soria traveled by horseback to the remote regions of the Sierra Madre Occidental where the Huichols had retained their pre-Hispanic religious ceremonies and way of life for hundreds of years. He managed to locate them and brought back examples of their traditional arts, all of which were created either as offerings to their deities or as ornamentation for themselves. Dressing beautifully was important to them as part of their intimate connection to the gods.

The governor of the State of Jalisco was so impressed with the Huichol work that he asked Soto Soria to help him organize a group of Huichol artists to make yarn paintings for an exhibition. This they did, and the exhibition was held in Guadalajara in the late 1950s. These were the first modern yarn paintings, intended to be hung on a wall rather than used as offerings.

By the 1960s, yarn paintings were being made for sale to the general public. The art form has evolved from simple, primitive symbols to intricate, highly skilled works of dazzling beauty. The subject matter of the yarn paintings always comes from dreams, peyote visions, or ancient Huichol mythology and religion, so the work remains sacred for the artists. Selling their work as an art form has given the artists the ability to create economic self-sufficiency from their extraordinary talent and has helped them to preserve their traditional way of life.

According to anthropologist Susana Valadez, yarn paintings “create enduring lifelines between Huichol traditions and the future, lifelines that allow traditional wisdom to thrive in the twenty-first century and that empower the people who carry its spirit and substance.”